← back to
Sub Pop
Get fresh music recommendations delivered to your inbox every Friday.
We've updated our Terms of Use. You can review the changes here.

by Amen Dunes (with Sleaford Mods) 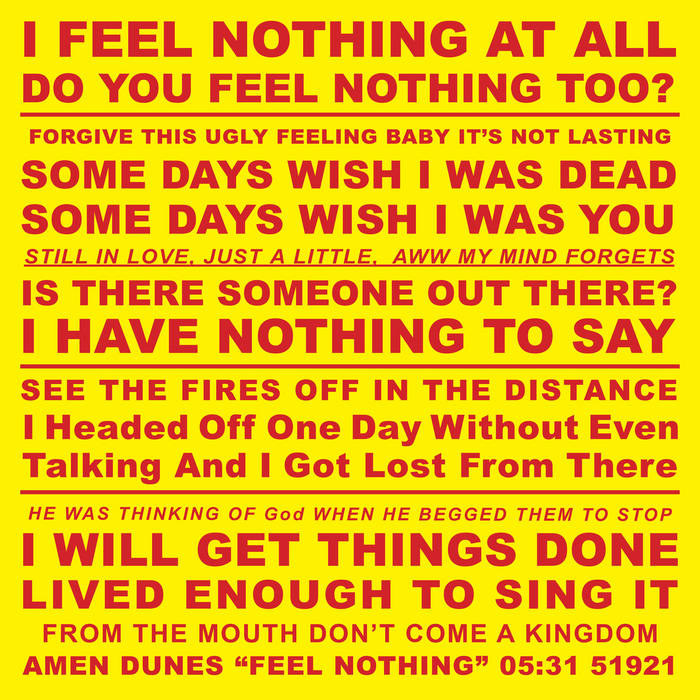 Amen Dunes (aka the project of Damon McMahon) returns with “Feel Nothing,” a powerful and honest first statement since the release of 2018’s beloved Freedom, and his debut release with Sub Pop. Recorded in Los Angeles with co-producer Ariel Rechtshaid and mixed by Craig Silvey, “Feel Nothing” begins with McMahon’s unmistakable voice chanting “Kingdom, kingdom, kingdom, kingdom, kingdom // be a prophet” until the Sleaford Mods rhythm drops and McMahon continues “Every time I hear a story // Got no good from it.” The song, which features synths by Freedom-collaborator Panoram, gradually introduces the rhythm-heavy next chapter in the Amen Dunes’ sound, before a duet by Sleaford Mods’ Jason Williamson and McMahon carries the song out. Where Freedom was “[Amen Dunes’] euphoric breakthrough … silvery and romantic, like a hallucination of the classic-rock songbook” (Pitchfork), “Feel Nothing” is a bold reflection on resistance, and a step further in the intentional reimagining of the world of Amen Dunes.

Bandcamp Daily  your guide to the world of Bandcamp